The ultimate goal of a database schema comparison and synchronization tool, like xSQL Schema Compare for SQL Server (aka xSQL Object), is to allow database administrators and database developers to safely and efficiently propagate database schema changes from one environment to another, most commonly from development to staging to production.

However, often the user needs to run a partial comparison and synchronization including only certain objects. Let's say the user chooses to synchronize the database view vw_01 but neglects to include table tbl_01 on which this database view depends. In a scenario like this there is a good chance that the synchronization script will fail to execute successfully on the target (table tbl_01 might not exist in the target or might be different). The user will then have to identify the cause of the failure and go back and include table tbl_01 in the synchronization, but that is not the end of the story, there may be many similar situations involved and the script will keep failing. Going through this painful and expensive process of identifying the object dependencies through trial and error, would defeat the purpose of a schema comparison and synchronization tool.
xSQL Schema Compare for SQL Server provides a critical comparison option "Include dependant objects" which is ON by default. After the user has selected the database objects that he wants to include in the synchronization, xSQL Schema Compare will automatically identify all the additional objects that must be included in the synchronization for the script to execute successfully on the target, and will include those objects in the proper order regardless of the user selection.
We often get support requests from users with the following question: "I have specifically excluded those database objects from the synchronization – why am I still seeing them in the synchronization script?!"  The answer is the "include dependant objects" option the purpose of which was explained above. You can however easily turn the option off by un-checking the corresponding checkbox under comparison options (see the screen shot below). 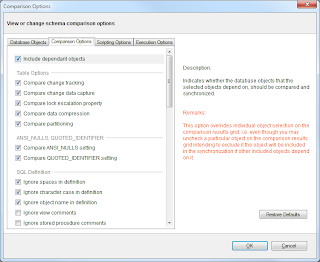 xSQL Schema Compare for SQL Server is the best database schema compare tool in the market available to you at an un-beatable price – free for SQL Server Express with no limitations and also free for other editions of SQL Server but with limitations based on number of objects in the database (see editions here: http://www.xsql.com/products/sql_server_schema_compare/editions.aspx). You can download your copy today from: http://www.xsql.com/download/package.aspx?packageid=10
Read More

While this level of flexibility and control is very helpful for many users it is also often the cause of confusion for others. You compare table1 to table2 and they show as equal but a minute later when you run a re-compare they show as different even though you did not make any changes to the structure of those two tables! After a closer look you realize that in the first compare you did not consider the "lock escalation property" whereas on the second run you did and that caused those two tables to appear as different.

So, does the user need to spend time understanding all those options in the new xSQL Schema Compare for SQL Server? No, absolutely not! In over 95% of database schema comparison and synchronization cases the user does not need to look at or even be aware of the existence of those comparison options – just compare, generate synchronization script and execute it on target.

Faster, safer, free (lite edition only) – publishing database schema changes to production has never been easier! The just released version 4 of xSQL Schema Compare for SQL Server (previously known as xSQL Object) is built on top of a completely redesigned, faster, scalable database schema compare engine, and brings a new streamlined, easier to use and much more efficient interface. Here are the highlights:
More details on the new release can be found here: http://www.xsql.com/products/sql_server_schema_compare/release_notes/v4/
The new version will continue to be free for SQL Server Express with no limitations and also free for other editions of SQL Server with some limitations - details here:  http://www.xsql.com/products/sql_server_schema_compare/editions.aspx
Download your copy now and see what you have been missing: http://www.xsql.com/download/package.aspx?packageid=10
Read More
← Newer Posts Older Posts → Home