When comparing the schemas of two Oracle Databases using the Schema Compare for Oracle, sometimes you may see "strange" comparison results, that is, you may see that two tables that appear to be identical to each other have been marked as different, or the other way around, two tables that you know have differences may have been marked as equal. We will explain those two scenarios below.

Marked as different but they seem to be identical! So, you see a table pair marked as different and click on the pair to review the schema differences. On the "Schema Differences" tab on the bottom you may notices that one or more columns have been highlighted as being different but there is no visible difference on the script! In these cases you will need to dig deeper to find out why those columns are marked as different. To do that expand the table on the top section and then click on the column you are interested on - on the bottom section of the screen you will see the script for that particular column with the different section highlighted. This difference will be visible on the table script as well however it is a lot easier to "spot" on the column script. Differences on default constraints, check constraints, default bindings, rule bindings, or extended properties can cause the columns to be flagged as different. 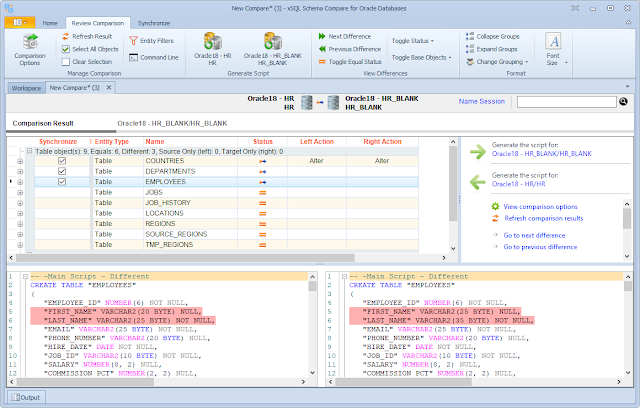 Download Schema Compare for Oracle now and try it for yourself.